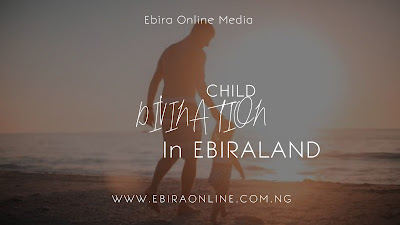 Ebira people are closely knitted related families, kindred’s, clans and sub clans (Iresu & Abara), the birth of any child into a family is said to be the return of a family member who has long died. The birth of a child in an Ebira household is usually greeted with joy, be it a male child or a female

Shortly after the birth of a child (usually after 9 days), the child is named, and during this naming ceremony, the child is presented to an elder of the family who raises the baby up and blows a breath into the child’s right ear saying “isa Adawú oka’awú, wawú” meaning “Obey and work with whatever your father tells you. He will do the same thing on the other ear enjoining the baby to be obedience to his or her parents.

Between seven (7) and nine (9) months into the life of a newborn, or in the child’s toddling years, the parents may decide to check for the fate of the life of their child. In other cases, a child may begin to display weird or preternatural attitudes which may be synonymous to that of a long dead relative, these attitudes usually prompt the child’s parents to seek “Eva” (divination) to know if truly such ancestor is reincarnated in the child. This process is known as “Eva Ozi“.
Eva Ozi is done by a fortune teller (Oheva), this Oheva throws cowries to commune with the gods conjuring the deities on revealing what life holds for the child.

Anebira hold this tradition dearly because it is believed that through it, a child’s destiny can be known, and if it is of good, the gods will be praised and offered sacrifices. Conversely, if the fate of the child is discovered to be bad, some sacrifices are made to appease the gods to overturn such destiny for good.

During this Eva Ozi , there are some customary duties popularly called “IDO” that the child is to observe for the rest of his/her life. Some children will be forbidden to eat snails, others (especially ladies) are forbidden from carrying clay pots on their heads. Eva Ozi in the times past are celebrated with pomp and pageantry.

As earlier stated, Anebira Believe that any child born into the family is the return of an ancestor who has died, Oyi Ye Ozi simply is a ritual to determine which ancestor in the lineage of the child is reincarnated and to know the reason for such ancestor’s return. It is also a process to appease the ancestor who reincarnated to help guide, protect and influence the newborn positively.

Oyi Ye Ozi is usually done during the Eva-Ozi ritual.

On the day the “Eva Ozi” is performed, representatives from the child’s maternal and paternal families are present to serve as witnesses and to know from which of the child’s parents lineage the ancestor is returning from.
Note that every returned ancestor must have an ancestry connection with the child (no matter how distant)
In the course of the divination, names of long gone ancestors are mentioned to know who amongst them returned in the child.

In some cases, the ancestor who returned may choose not to make him/herself known on that day, another day is chosen for the ancestor to “show his/her face” (Deyi Tu Ehe).

Upon revealing the returned ancestor, further inquiries are made on why the ancestor chose to return in the child, the reason for the inquiry usually is to help guide the child while growing up to live the legacies of the ancestor (if he/she left good ones) or to appease the ancestor to retrieve his/her mission if such ancestor left a bad legacy (this is very uncommon).

The returning ancestor is further asked to name what can be used to gratify his/her return, such ancestor may chose from but not limited to the following;

Finally, the ancestor is asked to chose a person from the living relatives present to strap the child on his or her back for the walk home. The chosen relative automatically assumes the position of the child’s godparent and the person is then dressed in white with the face marked with ” Uru ” (camwood), the child too is dressed in white and a white cover cloth is used to cover the child when he/she is strapped on the godparent’s back. This process is usually choreographed with praise-songs eulogizing the returned ancestor.

Ebira People believe every child is a reincarnation of a long gone progenitor and to help guide that child through life and sometimes to avert doom, every child should go through the rites of reincarnation to know the particular ancestor who reincarnated.

The coming of Islam and Christianity have in a way tried to put a stop to this practice, but it should be known that the practice is still being observed by many.

Another thing is that many children whose parents refused to observe these rites usually grow up to be adults with turbulent lives, they are usually met with misfortunes in the forms of sickness, retrogression and other ordeals, such people are often times advised by elders to go seek the ancestor reincarnated in them and to appease such ancestor, in most cases when this is done such calamities are countermanded and the person freed.

The rite of reincarnation is a beautiful part of Ebira Culture that should be explored, it shows the uniqueness of the Ebira people and their interrelationship.