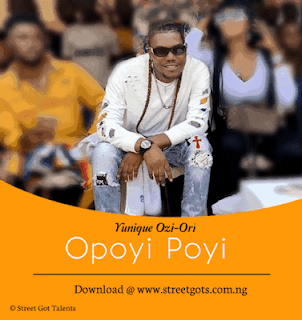 Yunique – Opoyi Poyi – Yunique Ozi Ori release I have promised so many people this song so i am putting it online now for everyone to download.

Opoyi Poyi features real Afro Pop Groove, with this song it clearly shows that it will be hard for Yunique Ozi Ori to go down in terms of Music in Ebiraland. Yunique remain the best Ebira Pop musician so far in 2020 as he has release nothing less than 3 hit songs already.

As Yunique and Sharon Sonia’s dating issue still continues within the Winners Entertainment cycle, Yunique is kind of still proving that anyone can do without anyone, and that he is still the best Musically as far as Ebira Music Industry is concerned. Download Yunique Opoyi Poyi Song Below after the cut….