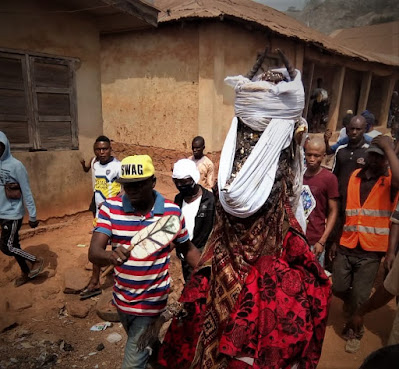 In Ebiraland only male genders are allowed to carry masquerades, also allowed to see some masquerades (Eku is the name for masquerade in Ebira language). This is because Masquerading in Ebiraland is cult that is a right for men in Ebiraland, this is also because women are believed to possess and have supernatural powers, that can allow them to change into different forms especially during the night time. This spirituality is called Ebe in Ebira language and the women that possesses this kind of powers referred to as Opochi (witch) one can conclude that Ebe means Witchcraft.

I will like you to know that I will be mentioning some terms in this article that are not English Language, but I will try to keep it simple and to also tell you the meaning of everything I wrote in Ebira Language.

Eku Irahu features during these festivals in Ebiraland;
Eku Irahu also performs at funerals of a male elder that is in the same cult as the masquerade, this is just to embody the spirit of the dead for a gentle repose of his soul in the world beyond. All activities takes place at night time.
Eku Ahete of Ebiraland
History has it that Eku Ahete is the one in charge of ensuring the free passage in the ancestral visits to the world during the Ekuechi festival i Ebiraland.

Just as i have mentioned above Ise means fortune telling, Eku Okise means, Masquerade That Tells Fortunes, this masquerades proclaims divine messages directly from God, I don't know if it's still a thing but i know for sure it used to be a thing back in the days. It prophesies to the people of what to happen in the future and how to avoid the bad things that wants to happen.
This masquerade often come out during Ekuechi and Echane festival in Ebiraland.

This is the masquerade that performed fully masked during the Echane festival, unlike Eku Irahu, Eku Echichi performed in broad day light, and women can and are allowed to see Eku Echichi, in short Women are actively involved in Eku Echichi.
Though women are not involved when it is time for core rituals. It is also known as Agadagidi during Ekuechi festival.
The performance of Eku Echichi during Ekuechi festival is referred to as Agadagidi because they are not always on full costume and will not be fully masked. In this performance, they chase people with Cain and flog playfully.. As crazy as it may sound, some people offered themselves for flogging just to prove to people how strong they are.
During the performance of Agadagidi, is when Akatapa often show their own talents (Akatapa is a jester masquerade in Ebiraland with a caustic tonged), Akatapa would mock Agadagidi and the spectators.

Eku Oba does not perform during Ekuechi festival. It announces the masking season, Eku Oba performs during core traditional funerals and during coronations of Ohinoyi, Otarus Ohidasi, Obobanyi etc.